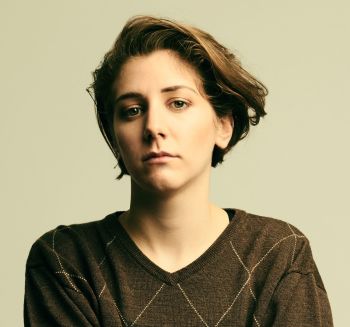 Sarah Keyworth is an award-winning stand-up comedian and writer.

Since first performing stand-up at university, Sarah has fast become one of UK comedy’s brightest new talents. Having already been a Funny Women runner-up, 2018 saw Sarah take her debut hour, Dark Horse, to the Edinburgh Fringe Festival. A thoughtful and hilarious meditation on gender, girlhood and the challenges of growing up different, the show was a huge critical hit, receiving four and five star reviews from The Herald, Telegraph, Scotsman and many more. The show also received a Herald Angel Award, a Pleasance Theatre Award and a nomination for Best Newcomer in the Edinburgh Comedy Awards.

After her run, Sarah took Dark Horse on tour around the UK (including a sold-out run at Soho Theatre) and then to Australia, where she was invited to perform the show at the Melbourne International Comedy Festival, again to widespread critical acclaim. While in Australia, she also performed stand-up on ABC as part of the prestigious Melbourne Comedy Festival Opening Night Gala.

Her second Edinburgh show, Pacific, was also a huge hit with audiences and critics alike, selling out its entire run and receiving 4 star reviews from The Times, The Scotsman, The Herald and many more. Sarah took the show on tour in 2020, selling out dates around the UK.

Sarah’s broadcasting career is also firmly on the up. She has appeared on Comedy Central UK’s Roast Battle, ITV2’S Stand Up Sketch Show, performed stand-up on BBC Radio 4 institution The Now Show, and has a number of her own TV and audio ideas in development with a range of production companies and broadcasters. 2020 has also seen Sarah launch hit new BBC Radio 4 relationships podcast You’ll Do which she hosts with Catherine Bohart.

“The most hilarious visual images”  ★★★★ The Scotsman

“An absolute gem” ★★★★ The Evening Standard

“Pulling in the biggest laughs” ★★★★ ThreeWeeks

"It’s refreshing to see something so generous and outward-looking”   ★★★★.5Chortle

Only one household (support bubble) per table.

Due to the Coronavirus we have had to change the way we do things at Canalhouse so whilst restrictions are still in place we are limiting the number of audience members so groups can socially distance. We are selling tickets per table.

Government Guidelines: (as of 14th October)

You must not meet people you don't live with in any indoor setting - whether at home or in a public place - unless they are part of your support or childcare bubble. You must not socialise in a group of more than six outside, including in a garden or other spaces like beaches or parks, and you must follow social distancing rules.

Pubs, bars and restaurants close at 22:00 BST. They are restricted to table service only. Face coverings must be worn by customers when they are not eating or drinking.

If you are watching the performance, you should: