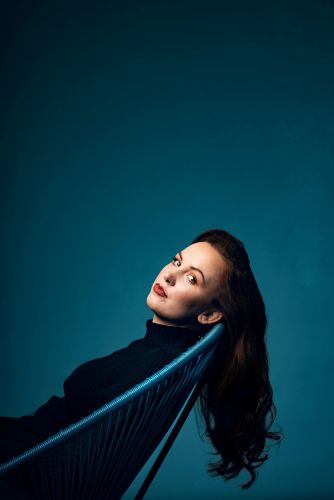 Catherine Bohart is an award-winning comedian, writer and actor.

Catherine began performing stand-up in 2015 and has enjoyed a rapid rise through the ranks of UK and Irish comedy, becoming a finalist in both the BBC New Comedy Awards and Funny Women the very next year.

Catherine took her debut solo show, Immaculate, to the Edinburgh Fringe in 2018. Immaculate received widespread acclaim, with The Times describing it as “the sort of perfectly structured Edinburgh debut you always hope for and rarely get to see” in their four star review. Catherine returned to the festival in 2019 with her second hour-long show, Lemon. It enjoyed a month of sold-out performances and excellent reviews before taking the show on UK and Irish tour, including a run of jam-packed performances at London’s Soho Theatre Mainspace.

Catherine has also taken her talents overseas. Spring 2019 saw Catherine selected to join the line-up for New Order, which showcases the best in original and trendsetting UK comedy at Melbourne International Comedy Festival.

Catherine’s  broadcasting career has seen her appear on E4’s 8 Out Of 10 Cats, Comedy Central UK’s Roast Battle, ITV2’s The Stand Up Sketch Show, Dave’s Jon Richardson: Ultimate Worrier and as a regular correspondent on BBC2’s The Mash Report. Catherine has written material for BBC shows The Now Show, The News Quiz, Newsjack and Frankie Boyle’s New World Order and E4’s Savage Socials. She has co-hosted BBC Radio 4 Extra Comedy Club with Arthur Smith, hosted a series of Funny From the Fringe for BBC Radio 4 Extra and was a guest on Reasons To Be Cheerful with Ed Miliband and Geoff Lloyd. In addition, Catherine was named The Times Comedy Face To Watch for 2019 and featured on the BBC New Talent Hotlist for 2017.

Catherine is also a trained actor, having studied an MA in Acting for Screen at the Royal Central School of Speech and Drama.

Exquisitely plotted and executed hour from a beautifully self-assured performer.  The List ★★★★

The sort of perfectly structured Edinburgh debut you always hope for and rarely get to see. The Times ★★★★

A beautifully-written benediction to the strength of family and the power of having faith in your own convictions... destined for great things The Herald ★★★★

Immaculate is a well-crafted and beautifully-delivered hour, and one which surely carves out a successful future in stand-up comedy The Skinny ★★★★

A winning mixture of self-deprecation and confidence... an assured debut
Bruce Dessau, Beyond The Joke ★★★★

A beautifully constructed reflection on conflicts that she knows she will wrestle with for the foreseeable future... a fully developed comic voice Fest ★★★★

Tightly written with some lovely turns of phrase... this is a very enjoyable hour  Three Weeks ★★★★

A thoughtful, funny hour that promises greater things are to come Funny Women ★★★★